Associated British Ports is to open a new next-generation-ready and open access cruise terminal for the 2021 cruise season in Southampton.

David was approached by ABP to provide 3rd party market due diligence in relation to the 5th terminal project, and is delighted that the project has been successful.

The fifth dedicated cruise terminal at the port will benefit from roof-mounted solar power and will also have Shore Power connectivity installed. This further commitment to sustainable operations at the port will enable cruise ships, with the right onboard technology, to ‘plug in’ while they are alongside.

This investment of more than £55 million into the long-term future of cruise will strengthen the Port of Southampton’s position as Europe’s leading cruise turn-around port and the UK’s number one departure port.

In strategic partnership with MSC Cruises and Norwegian Cruise Line Holdings Ltd, the Port of Southampton’s newest terminal will support a developing industry welcoming the next generation of ships in terms of size, capacity and technology.

Alastair Welch, Director of ABP Southampton, said: “We’re very pleased to announce this major advance in our cruise infrastructure at the port, delivering further access to Southampton for the industry, whilst supporting our commitment to accelerate improvements in local air quality.

“This investment is a huge vote of confidence in the future of cruise in Southampton and we’re excited to be at the forefront of a growing industry.”

Robert Courts MP, Minister for Maritime, Department for Transport, said: “Southampton is the heart of UK’s cruising industry and a new terminal will create even more jobs and boost the area’s economy. As we continue to support the cruise sector in its restart and recovery, it’s great to see Government funding being used to help deliver better services for passengers. This next generation facility also showcases to ports around the world how we’re pioneering the use of green technology right here in the UK.”

“Consistent with our commitment to driving a positive impact on society and the environment, we are pleased to further promote environmental conservancy by partnering with Associated British Ports for the new terminal that will feature Shore Power and Roof Mounted Solar Power.”

Gianni Onorato, MSC Cruises’ CEO said: “We are really proud to be further supporting the UK cruise industry at this incredibly important time for both the industry and the UK economy. At MSC Cruises we really believe in the potential of the UK cruise market and making this long-term commitment is evidence of that.

“Over the last five years MSC Cruises has increased our presence in the UK & Irish markets and following a positive response from travel agents and our guests we feel now is the right time to make a more substantial commitment. We are in a unique position that not only will we be committing to having an MSC Cruises’ ship home port from Southampton every year, but several of our ships will be visiting Southampton as a destination as part of our wider cruise programme.” 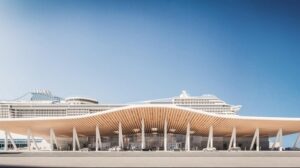